No one wants to receive a phone call that informs them that a loved one has been arrested and is in need of help. After all, we only wish the very best for those who we care about and learning that someone close to you has gotten themselves in trouble with the law can be quite jarring. While the majority of the time the bail process goes off without a hitch, there are cases in which a judge will refuse to provide a bail amount, and will therefore flat-out deny bail to the person after they have been arrested.

If your loved one is someone who is not being offered release upon paying a set amount, there are several reasons this could be the case.  We would suggest that you take the time to figure out what the exact reason is behind your loved one being detained. It is most likely that it will be one of the following reasons:

Your loved one is being accused of a very serious crime

One of the most common reasons a judge would deny bail to someone is due to the nature of the crime they have committed. Most commonly, if a person is being accused of murder, rape, kidnapping, or another serious crime, the judge will choose to make the bail amount extremely high or they will simply just not offer bail as an option.

If over time evidence emerges that your loved one may not have been part of the crime after all, there is a chance that the judge could set a bail amount or lower the existing amount. However, we wouldn’t count on this sort of thing happening as the majority of people who are accused of committing a very serious crime will remain behind bars until they have their day in court.

Your loved one is considered a flight risk

If there is even the slightest chance that your loved one is going to disappear should they be released on bail, the judge likely won’t allow them the option of getting out of jail in the first place. Yes, this even counts when people are a tiny bit of a risk. Judges would much rather keep a suspect in custody than potentially lose the chance to bring them to trial down the road.

Your loved one is believed to be a threat to society

In most cases, people will be granted bail, and then that defendant will leave the jail, go home, and keep to themselves until they have to make their appearance in court. However, there are times when this isn’t the case. Sometimes, the person will get into even more trouble once they are released from jail. IF your loved one is likely to do this, the judge may decide to deny bail as the defendant could post a potential threat to society or to themselves and others.

Your loved one is not a legal U.S. Citizen

If, after being arrested the courts discover that the defendant is not a legal U.S. citizen, there is almost no chance at all that the person will be permitted to leave the jail. This is also likely to cause many other problems in the future. Undocumented immigrants are most commonly reported to the U.S. Immigration and Customs Enforcement agency. While every situation is different, there is the chance that your loved one could face deportation.

Your loved one is a repeat offender

If your loved one has committed crimes in the past, they may be on parole or probation right now. If this is the case, being arrested again is never a good thing and will likely cause the judge to lock them up while denying bail.

Your loved one was disrespectful to the judge

One of the worst things you can do as someone who has been arrested and being held until their bail hearing is to be rude or disrespectful to the judge who is making the decision about whether or not you will be released. If your loved one took it upon themselves to talk back to the judge or simply to act out of line in one way or another, chances are they won’t be getting out on bail anytime soon.

Your loved one is known to miss court dates

There are many people who are already in the court system who have a history of missing court dates. Over the years, they have shown more than more time that they have bad judgment and are not good at arriving in court when they are meant to.

If your loved one is mentally impaired the situation becomes a bit more tricky to handle. It is unlikely that a judge will want to let them leave the jail in the case that they are acting abnormally. Often times, the judge will choose to have a mental health evaluation take place before he/she will consider a bail amount.

How to Proceed if Your Loved One Isn’t Denied Bail

If your loved one calls you and is able to be released on bail, be sure that you reach out to the preferred Lynchburg bondsmen at Affordable Bail Bonding. We are here 24/7 to help you with all you need where posting bail is concerned. Contact us today for more information or for help with your loved one’s situation. 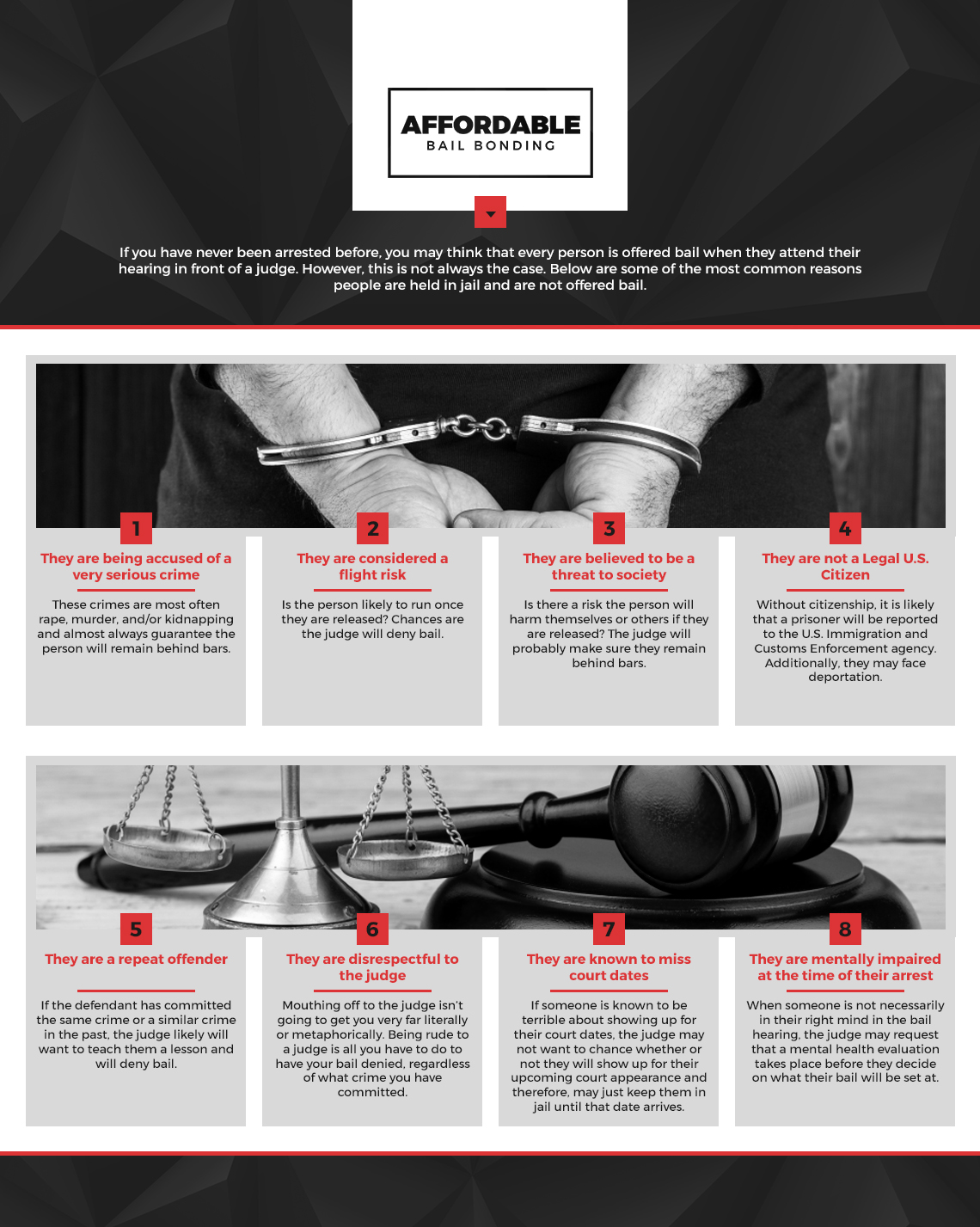